Thank you for your interest in our holidays. To help us provide the best service for you, please tell us a bit more about what you are looking for, including details of activities or particular holidays you are interested in. Our expert will then begin planning your perfect visit to Madagascar.

We really excel at tailor-making your trip to your needs. You may want to see certain species or visit particular parks, reserves or lodges. You may want a private plane or helicopter and high class car, or need to travel at a certain time of year. Tailor-making works whether you are an experienced traveler or trying out a wildlife holiday for the first time, wanting to enjoy a wildlife experiences as part of an occasion like a birthday, honeymoon or anniversary, or a busy executive in search of a short wildlife fix.

Have you always wanted to design your own tour but let someone else handle all the nitty gritty of organizing it? Do you run specialized tours where you'd like us to put them together for you? Keen birders, scuba divers, conservationists, volunteers, photographers, surfers, medical adventurers, hikers, bikers, historians and geologists – no matter what your specialty is, we can tailormake accordingly! We also offer unique tours which you're more than welcome to join us on!

Do you have a large family or group of friends that you would like to travel? Does your company want to run its own set of branded series tours? The NDAO-i-Travel tailormade services and charter team can do organize all of this for you, and more! Whether it be in an air-conditioned bus, a minivan or a 4 x 4 vehicle, we will tailor a tour for you to ensure that your dream holiday takes in everything you're expecting from it.

Our team of well-travelled and dedicated individuals will provide you with a detailed itinerary, suggested accommodation, professional, friendly service and all the support you need to make travelling in Madagascar an absolute pleasure.

Whether your party is made up of two or two hundred travelers, we'll pull something special out of the bag, just for you!

You can enjoy complete flexibility in planning and booking on all our tours for a truly customized Madagascar holiday that is in your budget and personal style. Traveling around a theme or exploring something in particular? Our tailor-made holiday experts are eager to assist in planning an experience that fits your requirements putting you in complete control of your next Madagascar holiday.

This page is under development.

WHAT TYPE OF ACCOMMODATION DO YOU PREFER?

WHEN YOU WANT TO TRAVEL?

HOW MANY PEOPLE WILL TRAVEL TOGETHER?

WILL THE CHILDREN TRAVEL WITH YOU?

How did you hear about "NDAO-i-Travel"?

Madagascar: On the hunt for sharks

Over the past 15 years, Vezo fishermen have been travelling longer distances to seek out productive fishing grounds. Taking only their fishing gear, cooking utensils and a few possessions, they sail northwards once the cyclone season ends and sea conditions are good. Often they sail at night, far offshore to catch favourable winds, cooking and sleeping in their pirogues.

Mozambique Channel, Madagascar - Driven by the collapse of local fisheries, increasing weather extremes and poverty, as well as the opportunity to earn money by selling shark fins and sea cucumbers to the Chinese market, the fishermen of south Madagascar have been leaving their homes in increasing numbers and migrating greater distances to places where they can still find productive fishing grounds.

The fishermen travel to the most remote parts of Madagascar’s west coast. Often living far offshore on tiny islands in the Mozambique Channel, they eke out a living in places with no potable water or food and no access to hospitals or schools.

Even in these remote seas, industrial, big-scale fishing undermines the marine ecosystem. And although they have fished in the waters for generations, the fishermen of Madagascar have no formal claim to the seas they depend on for a livelihood. The establishment of protected marine areas further close off vital fishing grounds to them.

Blue Ventures, a marine conservation NGO, and the traditional fishermen are working with the Madagascar government to create a network of community-managed marine areas. By giving traditional fishermen management rights over their fisheries and protecting them from over-exploitation by outsiders, they hope to restore the fisheries.

A shoal of fusilier fish caught in the gill net of a fisherman. The net covers a reef once dominated by living coral, but now overgrown with algae. Overfishing, exacerbated by the negative effects of climate change and ocean acidification, which are beginning to be felt here, have led to extensive degradation of coral reefs, causing the collapse of fisheries they once supported. 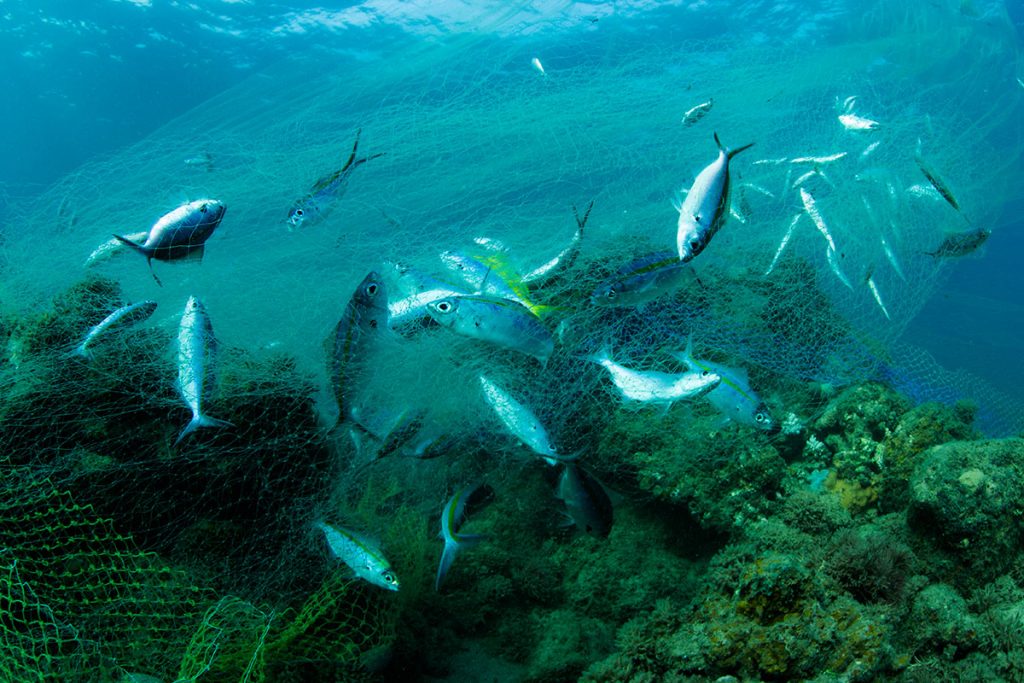 Women dig away sand that had started to cover a well, blown by relentless winds. Climate change is predicted to increase the intensity of cyclones in this region, making rainfall more erratic and drought more severe in the south of Madagascar. 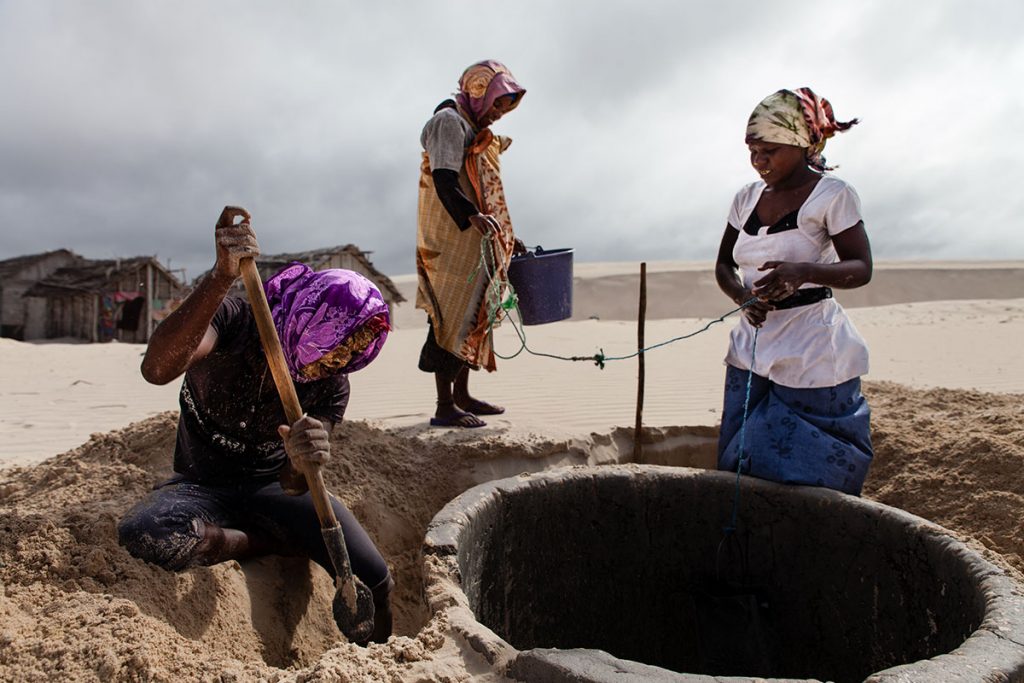 Francois, in his 60s, has been fishing for sharks for 30 years. He says that 15 years ago he was catching adult sharks - tiger, hammerhead and 5-metre great whites - too large to pull into his pirogue, but now he mainly catches small, immature sharks. Overfishing, driven by strong Chinese demand for shark fins, has led to the collapse of local shark populations. Over the past decade, he has been forced to go further from his home to find sharks. 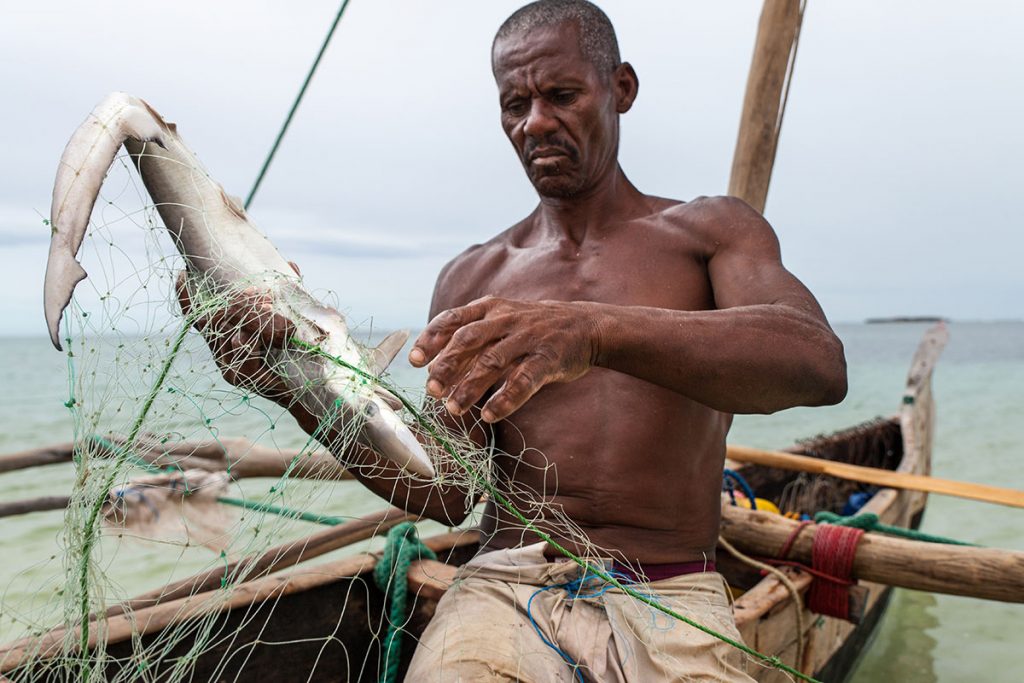 During their annual migration north, the fishing families journey from the sheltered beaches of southwest Madagascar across exposed seas and along a coastline where the breaking surf makes it difficult to land their sailing canoes. 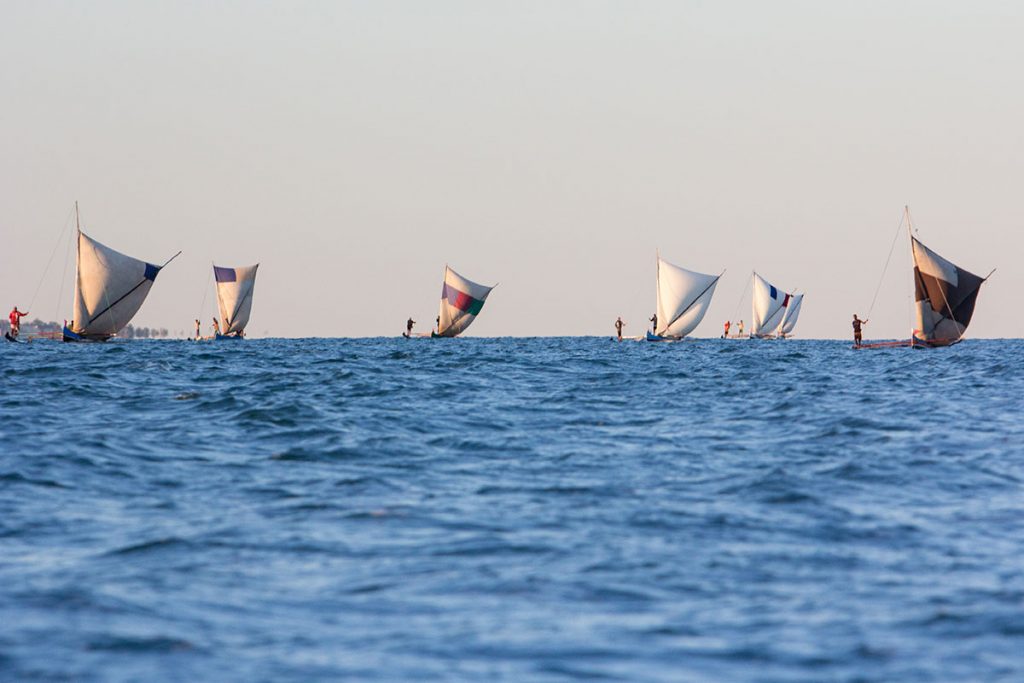 As dawn breaks, two Vezo boys man the sails and rudder of their family's pirogue. While migration allows the families to meet their immediate sustenance needs, it locks their children into a cycle of dependence as they are unable to pursue an education. But many youngsters prefer to learn how to fish and sail. They say that even with a formal education there are no jobs for them, so they are better off learning how to survive from the sea. 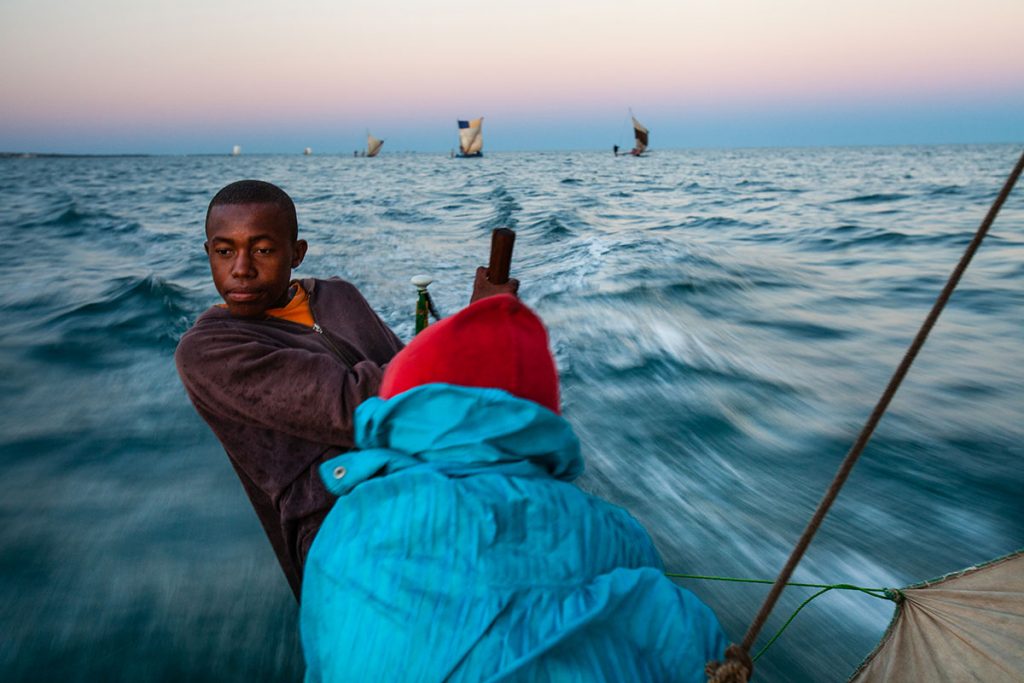 The family of fishermen from southwest Madagascar makes their annual 600km trip north of their home. Strong southwesterly winds from the Antarctic drive them north. They use knowledge of the coast, winds and currents to navigate - often beyond the sight of land and at night. 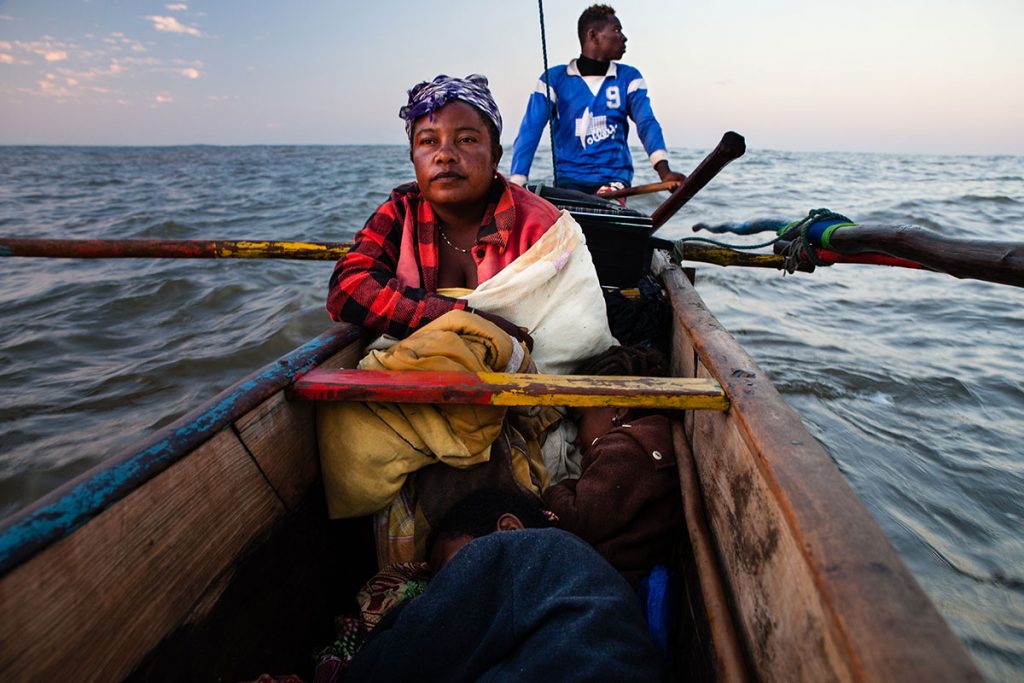 Fishermen camp on a sandbar in the Barren Isles, in western Madagascar. The fishing families live here for as long as the weather permits, leaving only during the cyclone season. They free dive for sea cucumbers and fish for sharks on the reefs farther out into the Mozambique Chanel. It is only in remote areas such as this that fishermen can still find sea cucumbers and catch large sharks. 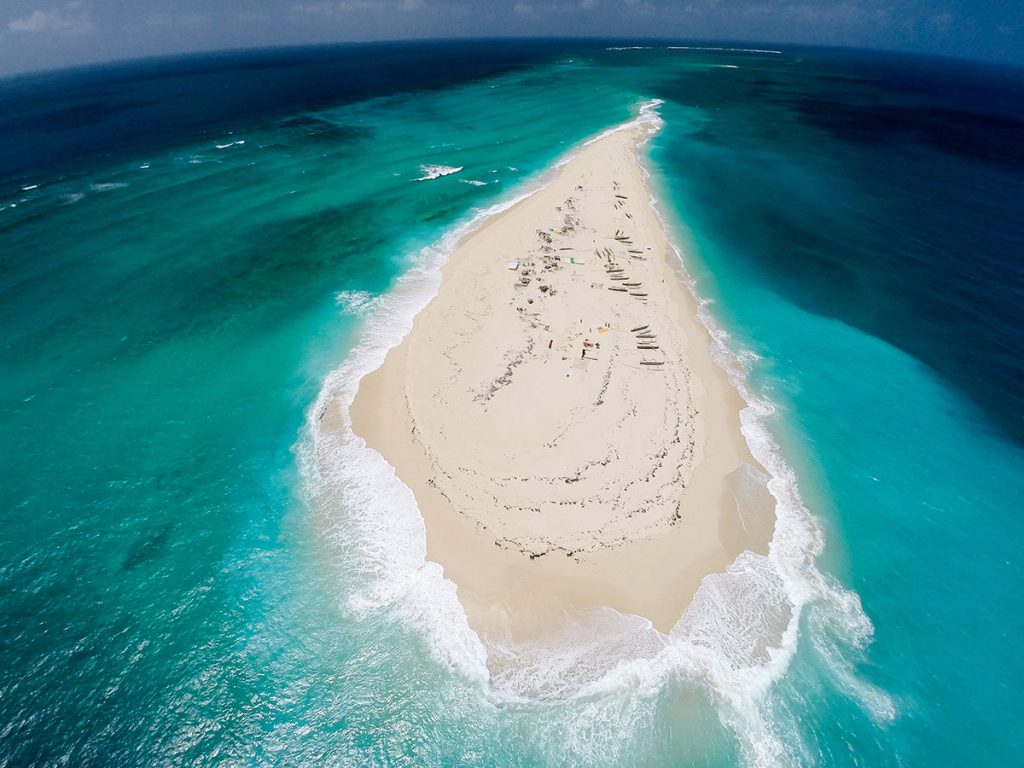 Migrant Vezo fishermen set up a camp on a remote sandbank, 25km offshore in the Barren Isles, west Madagascar. The cay is little more than 200m long, and will become inundated during the next spring tide. The fishermen will stay here as long as the weather permits, only returning to the mainland for water and provisions. Far offshore they occasionally cross foreign industrial longliners. Illegal, industrial-scale teams use scuba to dive for sea cucumber and have stripped the reefs where Vezo free-dive. 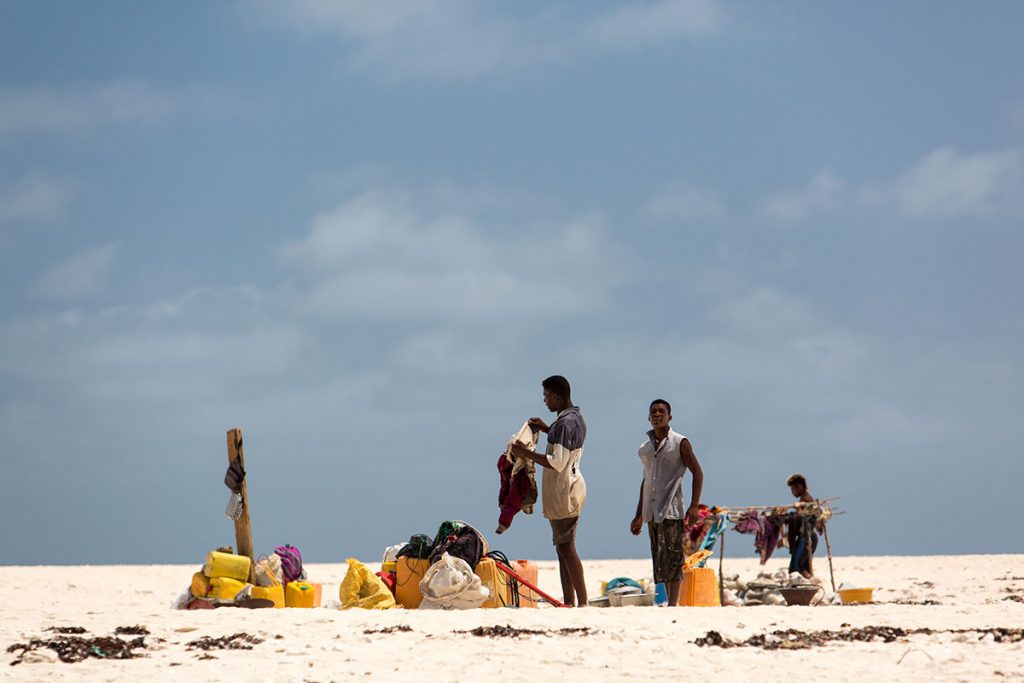 As the sun rises, Vezo fishermen sail from the tiny island they live on far out into the Mozambique channel. If the winds are good, the fishermen rise at 3am so that they can catch the favourable winds before dawn; they sail 20km-60km out into the channel and spend the day free-diving and checking their shark nets; then sail back in the afternoon. 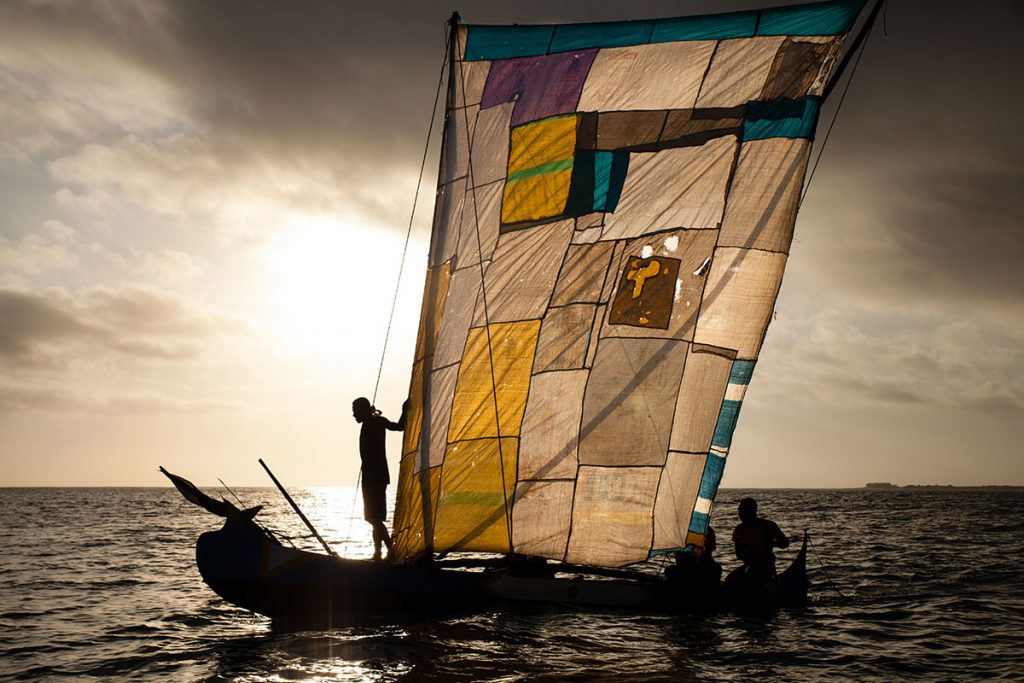 A migrant fisherman free-diving for sea cucumbers on a rocky reef, west of the Barren Isles, Madagascar. Even in faraway fisheries, they are struggling to find adult sea cucumbers. They carry long spears to add2 metres or so to the depth they can exploit. For them, the effort is worth it: Chinese middlemen will pay them up to $20-$30 for certain species. 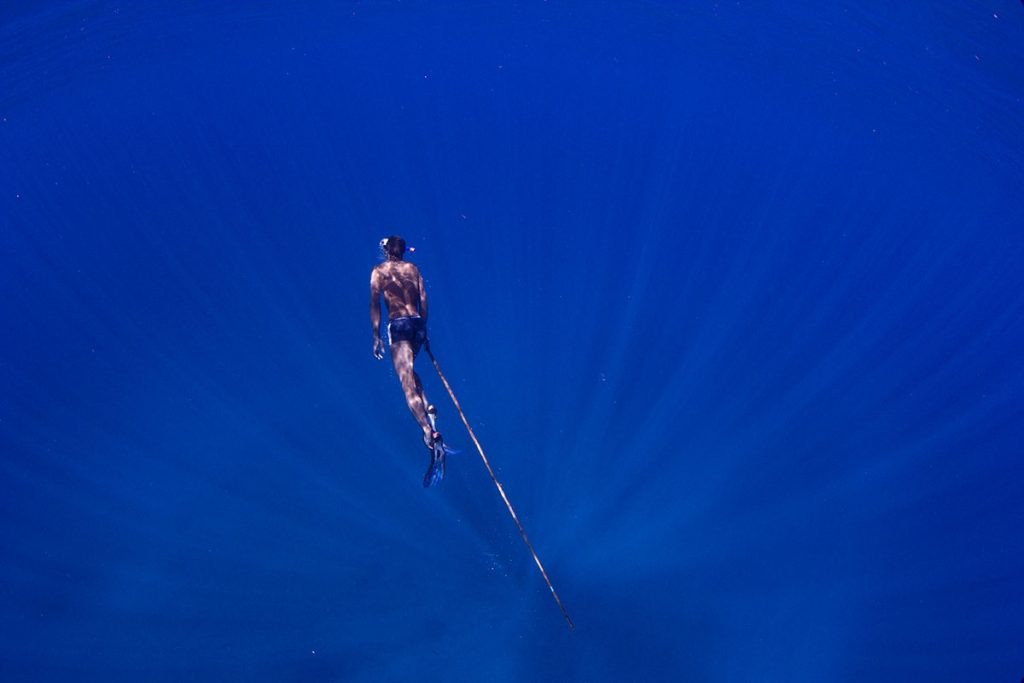 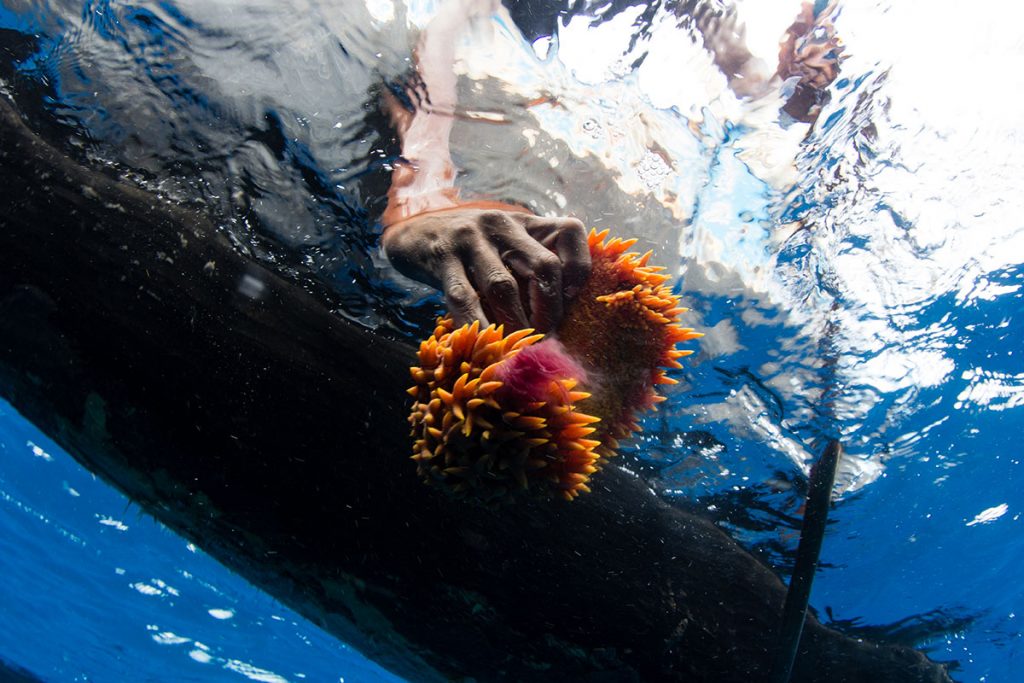 Shark fishing was recorded in Madagascar a century ago; but it was only in the early 1990s that traditional fishermen started targeting sharks intensively. Increasing Chinese affluence drove the value of shark fins up, making shark fishing lucrative. The fishermen continue to catch shark despite falling shark fin prices, while also eating the meat and using the liver oil for cooking. 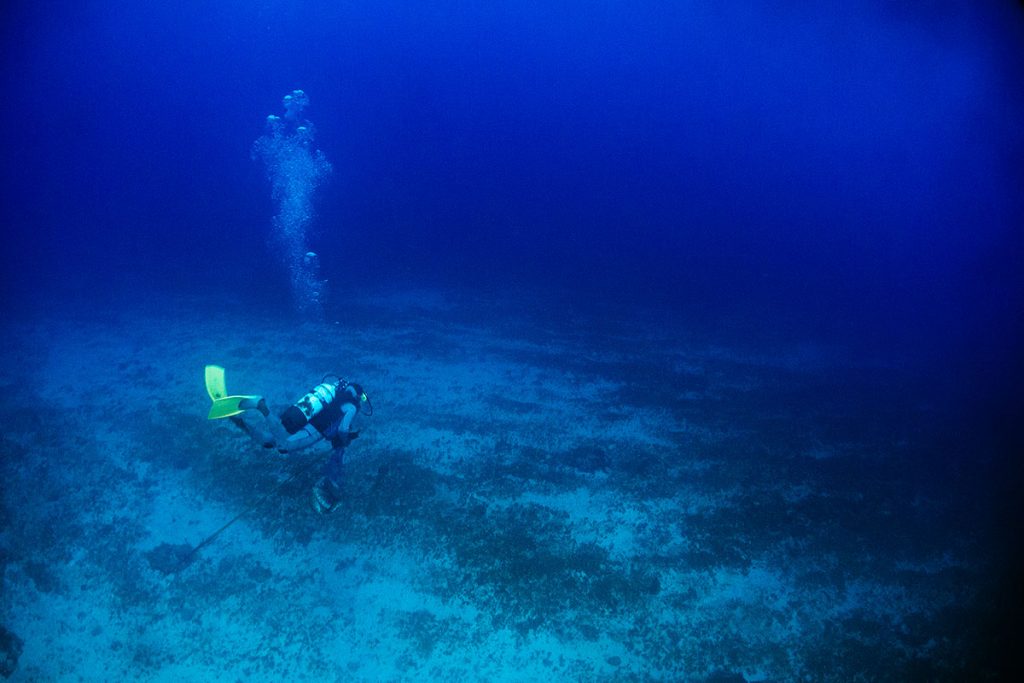 On a sand cay 30 km offshore in the Barren Isles, fishermen salt sea cucumbers. These sea cucumbers were harvested by scuba divers at 35 - 45 metres deep. Scuba diving for sea cucumbers is illegal in Madagascar and also extremely dangerous, with untrained divers using rusty old equipment and diving 6 to 8 times a day to depths greater than 35 metres. They dive alone and many fear of being lost at sea. 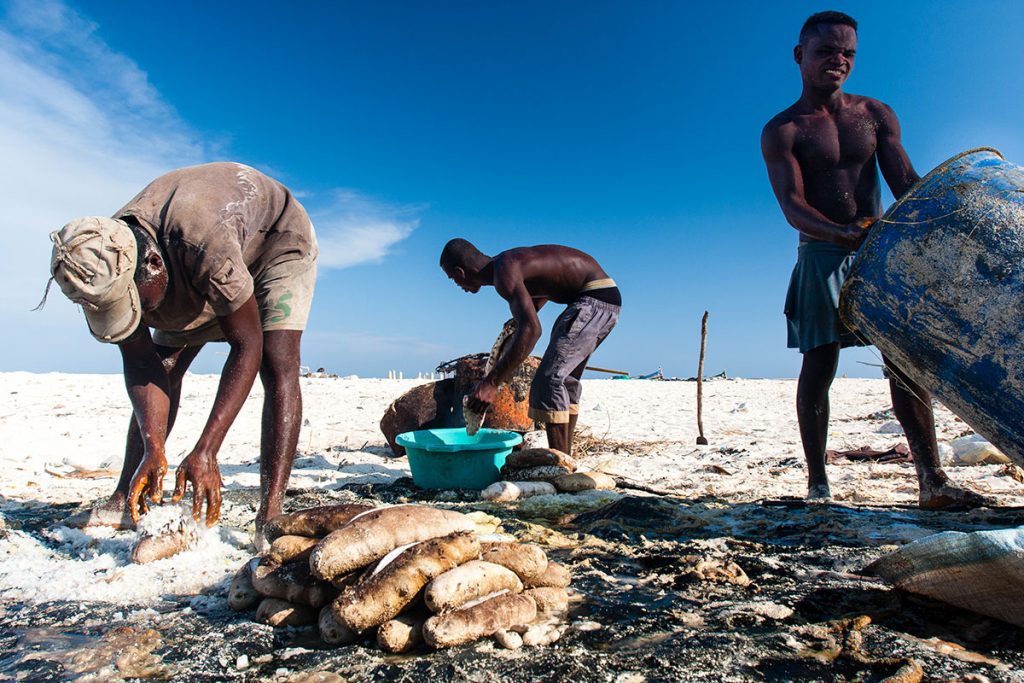 In a timeless custom, fishermen help each other to pull a sailing canoe up from the surf on to the sandbar they are inhabiting. In the remote islands, there is a strong sense of community among the fishermen. The government of Madagascar and Blue Ventures, a marine conservation NGO, are working with traditional fishermen to create a community-managed marine protected area. By giving small-scale fishermen strong management rights, they hope fisheries will recover and even become profitable again. 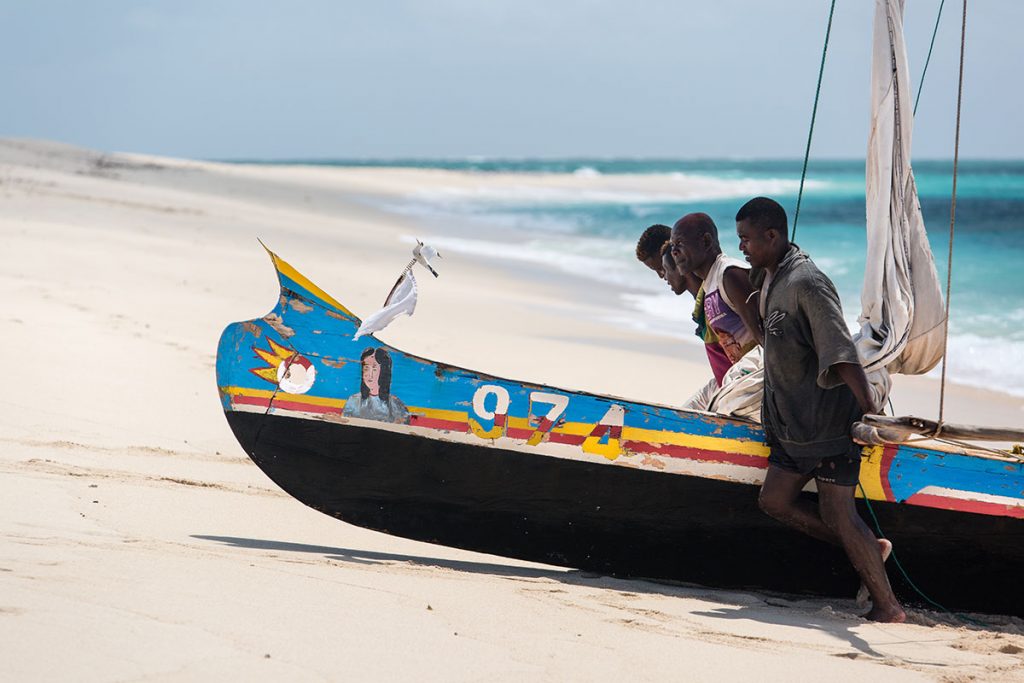